Another winter, another SCBWI conference! I have only just now started collecting my thoughts and photos from this excellent event, and the time I got to spend following it. I am NOT a city girl at all, but it’s impossible to NOT be caught up in the excitement of the city, the fast pace, and the caliber of the speakers there. Well, at least for a little while. Then I need to go home and take a 24-hour nap! 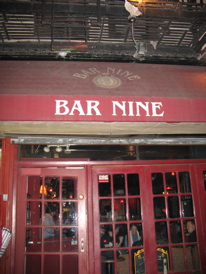 We arrived in the city in time to hit the Kid’s Lit Drink Nite at Bar 9, set up by Betsy Bird (Fuse #8), who is surely one of the funnest librarians ever! It was neat, and somewhat surreal, shouting at all of the people from the kids lit blog world and beyond (yep- very loud in there!).

Here I am with Ruth McNally Barshaw, who is somehow able to continuously keep drawing in her sketchbook amidst noise, cab rides, lines, anywhere! It amazed me. Also here is the fabulous Barbara Johansen Newman. Follow that link and you can check out her post on the conference, too!


Now on to the speakers…wow!! 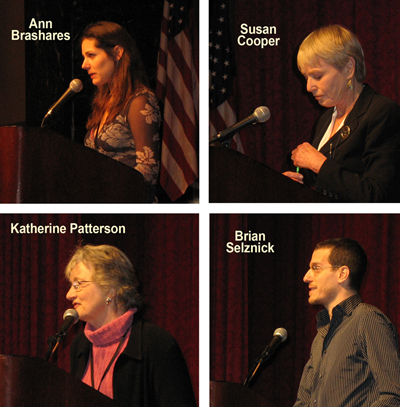 Very inspiring to hear these people talk. I think it’s the best part of the conference- hearing people you have heard about and whose books you’ve read. Articles and jacket flaps don’t do them justice- nothing can take the place of hearing authors and illustrators in their own voices.

Katherine Paterson has had an amazing life, and has worked differet aspects of that life into her books. She spoke about overcoming the fear of being “naked” in public- of allowing yourself to write from those parts that aren’t so easy to show. She also mentioned a prime fear of hers is of being mediocre- something that you can’t allow yourself to succumb to. Only YOU can write your stories. BTW, she approves of the movie version of Bridge to Terabithia, although not neccessarily the trailer!

Anne Brashares claims to not know what she’s doing…but oh, methinks she does! She says love your characters, don’t make it easy for them, but let them be sympathetic. In thinking about her characters, she tries to think of them not only as 15, but also as the 5-year-old they were, and the 45-year-old they will be.

Susan Cooper was just amazing to hear. “Subconscious haunting” is a theme that crops up in her work repeatedly, and where she writes from. As a child of war, she grew up with a very strong sense of good and evil, light and dark- but she also realized from an early age that just who was who is a blury picture! Writing relates to gardening in many ways for her (me, too!)- the idea of coming up with good stuff from your (mental) compost heap, of germinating ideas…and tending to growing ones! 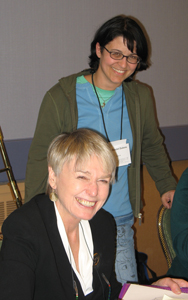 By the way, poor Susan had to sign about a bazillion books that night, and I was just about LAST in that line. Look, she’s still smiling somehow! Susan was signing during the Art Display, which featured about 150 pieces of art (mine, too). A strong showing this year, in number and in quality!

Brian Selznick was a great speaker- and it was nice to hear from an illustrator who also writes. Turns out Brian went to RISD at the same time as me, but of course, neither of us were studying illustration too strongly at the time- so I don’t remember him being there (in college, I spent most of my time buried deep within the film building, working on animation projects). It was fascinating hearing about his process- he’s very interested in the forward motion created by the turn of the page- of one thing leading to the next, almost like a movie. Check out his latest: The Invention of Hugo Cabret, which is freakin’ amazing, and the perfect “illustration” of how page-turning can bring you into and through a book!

Here I am with Brian, and his book, The Doll People. This book, and it’s follow-up, The Meanest Doll in the World, are current favorites of the dollhouse-owning Dubois twins! 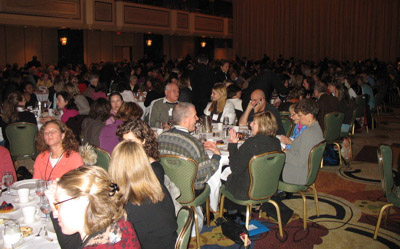 Here’s a little idea of about how many people were at the conference- I heard there were about 1000, and I believe it!

Here is Tomie DePaola with Steve Mooser and Lin Oliver (the King and Queen of SCBWI!) at the moment of Tomie’s “retirement” from the board. Tomie was instrumental in getting illustrators to be part of the group and has since been a driving force within the organization. Even though he’s stepping down, he retains the right to party with the group- and was given a silver drink mixer as a Lovely Parting Gift!

There were plenty of other good speakers and sessions, but, well…I guess you’ll just have to come to NYC next year to get the full effect- it’s worth the trip!

For the first time I was able to stay in NYC after the conference and do some publisher visits. I joined up with Janee Trasler, a swell illustrator from Texas with similar artistic taste (meaning, we both like and make art for the very young- we have the same rep, too). It was great fun meeting up with the publishers we work with, and getting to put some faces to the names we have heard. Also fun seeing just what it looks like inside the publishing houses!

Here’s me, attempting to borrow some of Janee’s hair!

Our Excellent Adventure took us to Scholastic, where I snapped this picture of me and Harry Potter. Don’t even get me started about Book 7- speculation is rampant at Maison Dubois! While there we ran into Wilson Swain, who was one of the winners of the SCBWI Art Display. Very nice guy, and WOW- amazing art- check it out!

I REALLY need to get some work done…I also need to get ready for next weekend’s Whipering Pines Conference. This time, I’ll be doing the speaking- yikes!

I mean, no problem!